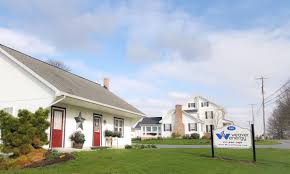 At 25 years old, a family heating oil and fuel delivery business in Pennsylvania successfully straddles the line between progressive and traditional

Weaver Energy, a family-run heating oil and fuel delivery business located between Philadelphia and Harrisburg in Lititz, Pennsylvania, is celebrating its 25th anniversary this year. And while there is nothing traditional about 2020, Weaver Energy honors the traditions on which Ken and Deb Weaver founded the company two and a-half decades ago. The pillars that hold up the family business include ideals such as success is built on a strong work ethic and prioritizing customer service, and trust is the foundation of any relationship. How does one build trust? The answer, according to Kris Lee, head of sales and development for Weaver Energy, is by keeping one’s word. This is a commitment Weaver Energy has honored with its customers since day one.

“Ken Weaver, my father-in-law, his motto early on was ‘Big enough to serve, small enough to care,'” Lee says. “And that’s true to who we are.”

Today Weaver Energy’s home heating oil customers number in the thousands, but when the company started in 1995, it had one delivery truck. “Since then, we’ve grown at a fairly good clip,” Lee says. “Now we’ve got five trucks for home heating oil delivery, farm fuel delivery and construction fueling, and we have a fleet of six 18-wheelers that haul bulk fuel to gas stations and other commercial businesses. We offer everything from ultra-low sulfur heating oil (ULSHO) to conventional ethanol-free gas, on- and off-road diesel, and kerosene. We run all our drivers five days a week, and we have one driver working over the weekend.”

From the outset, Weaver Energy has provided a critical service component to its home heating oil delivery business. “That has been a major value-add to our customers,” Lee says. “Our customers really like to be proactive and keep up with their equipment, and we handle all of that―preventative maintenance work, annual tune-ups and more. Our region is heavy in oil as a heat source, so we provide everything from a cleaning service to emergency service calls on weekends and holidays. If their equipment fails, we bring in an installation team and pull it out, and we put the new system in whether it’s oil, propane, natural gas, heat pumps―we work with all of it, except geothermal. We don’t deliver propane yet, but we do service propane equipment and do installs.”

In addition to offering home heating oil customers a full slate of fuel delivery, repair and replacement services, another major amenity Weaver Energy provides is fuel quality sampling at the terminals from which the company secures its fuel, particularly from October through April, to better understand and stay on top of the products Weaver Energy drivers deliver to their customers. Not only does this ensure the fuels are on-spec, but Lee says this allows Weaver Energy to know “what we’re dealing with, so we can offer an additive program to better suit our customers’ needs.”

Weaver Energy has offered fuel quality management services as a benefit to its customers for quite some time, but several years ago when Weaver Energy was introduced to Advanced Fuel Solutions, the ensuing collaboration streamlined and improved its approach.

Consultation is one of AFS’s biggest strong suits, according to Lee. “That, and how quickly their response time is,” he says. “With AFS it’s nice to have a one-stop shop for testing, analysis, results and help offering solutions. The education, collaboration and care for detail they provide is top notch and second to none.”

Mark Smith, national sales manager with AFS, works closely with Weaver Energy to help provide answers when issues arise in the field. “Mark has provided me with a lot of learning tools,” Lee says. “He’s been a sort of teacher to me as I’ve gotten into the fuel industry. I try to pick up from people who have more experience than I do, and I seek out good information to better serve our customers.”

The consultative side of AFS pairs well with its premium, contemporary additive chemistries. “We had offered very basic additives for years―summer and winter diesel blend additives―and then one day Mark stopped in,” Lee says. “We had a nice conversation. We hadn’t evaluated our additive offerings for several years, and we felt comfortable with Mark and AFS, so we started exploring other options to see what else is out there. I can say that we have been extremely thrilled with the products AFS offers us.”

A few of the popular AFS additives Weaver Energy makes available to its residential, commercial and wholesale customers include:

Weaver Energy has offered a 2 percent blend of biodiesel in its heating oil, referred to as Bioheat, for 12 years now. The company splash-blends the biodiesel in-house. “We pick up our biodiesel from Hero BX in Erie, Pennsylvania, and we store it in a 10,000-gallon temperature-regulated tank at one of our facilities,” Lee says. “We treat all our heating oil with HEATDOC by AFS to help with longevity, corrosion and potential sludge.”

This additization is particularly important now that Pennsylvania requires ULSHO, which can attract and hold more water than traditional straight-run fuel oil. In addition, ULSHO has more of an issue with bacterial growth because sulfur is poisonous to microbes and the lack of sulfur in ULSHO allows bacteria to flourish. Furthermore, while 2 percent biodiesel adds back important lubricity lost with sulfur removal, it adds one more hygroscopic component to the fuel. Together, these three issues―ULSHO’s greater propensity to attract and hold water, biodiesel’s hygroscopic nature, and the fuel blend’s lack of sulfur to combat growth of bacteria, which thrive in water-fuel interfaces―means today’s fuels demand contemporary chemistries such as HEATDOC to perform.

“We’ve seen great results,” Lee says. “From our service side, we see less issues on an annual basis per household. Our techs find the equipment is cleaner, there’s less soot, fewer fouling nozzles, less overall maintenance, and fewer pump failures―it’s fairly rare for us to have to change pumps out on our customers’ heating oil equipment. I attribute this to the Bioheat, as well as the HEATDOC we’re using.”

Lee adds that Smith brought him a few pumps from customers who weren’t using Bioheat or HEATDOC additive, and they were yellow, tarnished and generally beat up inside. “My customers’ pumps, on the other hand, still look new inside,” he says. “To see this, to put your hands on it―well, it’s just amazing to see. The proof is in the pudding.”

The descriptors “traditional” and “progressive” don’t often go hand-in-hand, but they do for Smith as he describes Weaver Energy. “It’s a well-run company founded on traditional family principals and beliefs,” Smith says. “Weaver Energy is a very progressive heating oil and fuel delivery company. They genuinely care about their customers and relationships with business partners like AFS. Kris has a great knowledge of how additives can improve the reliability and performance of the fuels they deliver.”

When asked what makes Weaver Energy progressive, Lee says, “For one, we’re not a company that just offers straight home heating oil. We are diversified, selling on- and off-road diesel, and kerosene if or when it’s needed. And we also try to be at the forefront. For instance, when ethanol-free gas became available, there was only one terminal supplier at that time. We made an effort to carry and push that fuel. We know the benefits of it in certain applications.”

Another area in which Weaver Energy is progressive is how the company treats its drivers. “We like our drivers to have full-time work year-round,” Lee says. “We don’t want to lay off drivers out of season, we like to keep them working.” And work they do. Lee says Weaver Energy’s drivers have more than 200 years of combined fuel-field experience. “That’s just the drivers,” he says. “That’s spectacular for a family-run business.”

On top of the diverse array of products offered and the company’s keen interest in keeping its employees working, Lee says Weaver Energy’s forward-thinking approach to implementation of innovative technologies might be another reason why one could describe the company as “progressive.”

Whether it’s new hardware on the trucks, or backend software to make their lives in the office and vehicles easier and as efficient as possible, Lee says Weaver Energy is willing to go the extra mile. But it’s not just the employees who benefit from technology integration.

“We just added a new piece here in the past six months, remote tank monitoring on customers that have tanks holding products that we may not haul every day, like ethanol-free 90-octane gas,” Lee says. “This allows us to see where our customers are with their fuel levels and take the burden off of them so they don’t run out. I know when they need fuel before they do. It’s an awesome tool. Efficiency is important, it helps us do our job and do it well.”

Also, when customers call Weaver Energy, they get a real person on the other end of the phone, not a recording or an automated system―a perk that is getting harder and harder to find these days. “One of a few of us answers the phone around the clock,” Lee says. “That’s whether it’s after hours or on the weekends on the service side for an emergency when, for instance, a homeowner runs out of heating oil, or a transport customer doesn’t have enough fuel to make it through the weekend. Our biggest value is customer service. Attentiveness. Dealing with questions. Being proactive in situations whenever we can. A personal touch. Now, with COVID still rampant in the world we live in, face to face is not what it used to be, and we try to respect everyone in that regard. But solidifying relationships is extremely important to us. In Lancaster County, it’s all about relationships. If you are not from around here, then that’s easily picked up on. Our customers are loyal. And so when arrangements are made, we stand by what we said we’ll do. Word of mouth is very important around here.”

Weaver Energy has grown substantially since Ken and Deb Weaver started it 25 years ago, but through that expansion the company hasn’t lost its family values―or the family members. Today Ken and Deb’s son Shane Weaver is president and together with Lee, who is married to Shane’s sister Shanelle, runs the day-to-day operations. And Ken? Well, instead of sitting on a beach somewhere in Tahiti, Lee says Ken is still in the office daily, running service team installations, providing quotes and more.

Resting on its laurels is not what this company is about. Instead, Lee says Weaver Energy plans to continue expanding. “Our goal here at some point in the next five to 10 years is to branch out into the propane market,” he says. “But we don’t jump into anything without the details in front of us. If we do it, we will do it well, and we will do it right―the first time around.” Adding another transport truck in 2021 is also in the short-term plans. “We want to expand our delivery region from our home base,” Lee says. “To do that, we need new infrastructure and drivers, so we hope to add like-minded team members. Over the past three years, we’ve seen other competitors in the market who are no longer around. So we want to expand on that growth opportunity, and try to do it well.”