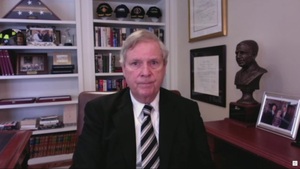 Secretary of agriculture nominee Tom Vilsack stressed the important role biofuels and bioenergy will play in meeting the Biden administration’s climate goals during a Feb. 2 hearing before the Senate Committee on Agriculture, Nutrition and Forestry

Secretary of agriculture nominee Tom Vilsack stressed the important role biofuels and bioenergy will play in meeting the Biden administration’s climate goals during a Feb. 2 hearing before the Senate Committee on Agriculture, Nutrition and Forestry.

Vilsack is a former two-term governor of Iowa who served as secretary of agriculture during all eight years of the Obama-Biden administration. During the hearing, members of the Senate ag committee applauded his past work and expressed strong support for his confirmation.

In his opening statement, Vilsack said that although he has served as ag secretary before, he realizes this is a fundamentally different time, he is a fundamentally different person, and the USDA is different department that it previously was. “I think we have to recognize that going into this process,” he said.
Vilsack said when he first entered politics, he modeled many of his views after those held by Robert Kennedy and quoted him as saying “some people look at things as they are and say why, and others dream of things that never were and say why not.”

“I think we are faced today with a number of ‘why not’ opportunities and moments in agriculture, in the food industry and in rural America,” he said. One of those “why not” moments is focused on climate change. “I think there is an opportunity for us to create new markets, incentives for soil health, for carbon sequestration, for methane capture and reuse, by building a rural economy based on biomanufacturing, protecting our forests, turning waste material into new chemicals and materials and fabrics and fibers—creating more jobs in rural America, creating more farm income stability and also reducing emissions,” Vilsack added.

When questioned on the Biden administration’s net zero carbon goals, Vilsack said he thinks efforts to meet those goals will provide U.S. agriculture with a competitive edge in terms of world trade while also responding to increasing domestic demand for greater sustainability. There are a number of ways that the USDA can create ways to incentivize those practices and create new market opportunities that will produce resources and income for farmers and help create more rural jobs, he added. Vilsack specifically offered biobased manufacturing as an example, noting that there is an opportunity to convert ag waste into a variety of products.

Regarding biofuels, Vilsack indicated he expects biobased fuels will continue to play a large role in transportation. He explained that, like many Americans, he still drives a car that is more than a decade old. Even with policies to boost electric vehicles (EVs), Vilsack stressed that automakers are not going to suddenly stop producing combustion engines. “We need alternative fuels in addition to, and to complement, our efforts on [EVs],” he said. “I don’t see why we can’t have both—and over a long period of time we are going to need both.”
“At the same time, we also recognize that there will be more than more electric vehicles that will be utilized in this country, and we also recognized that that is going to require energy,” Vilsack added. There are opportunities for rural America to help provide that energy, he said, noting those opportunities could be beneficial to farmers and ranchers.
Vilsack also said its important to look for new ways to incorporate biofuels into other forms of transportation, stressing he sees tremendous opportunity in the use of biofuels in aviation and marine applications. “I think marine and aviation fuel are a future for biofuels,” he said.

When asked about how he will support the Renewable Fuel Standard, Vilsack said he will work closely with the U.S. EPA to ensure folks at the agency fully appreciate the benefits of the RFS and biofuels industry in terms of jobs and environmental benefits. “This industry has made great strides in becoming much more environmentally friendly than it was at the beginning, and sometimes I fear we are still working off old research,” he said, noting new research indicates that the biofuels industry provides significant environmental benefits and cleaner air. Vilsack also said he will advocate for the EPA to return to past practices under which small refinery exemptions (SREs) were “very, very, very infrequently granted.”

Vilsack also spoke about the need to use USDA resources to help build out infrastructure to make higher biofuels blends available to U.S. consumers. He referenced the Higher Blends Infrastructure Incentive Program established by the previous administration and said he understands that not all of the resources dedicated to that program have been invested. He said those funds could potentially be used to help support those in the biofuels industry who have been negatively impacted by the COVID-19 pandemic.

“As we look at the future, I think biofuels continue to play a role in reducing emissions and providing job opportunities in all parts of the country,” Vilsack said. He also indicated he believes the Biden administration will support the biofuels industry, noting that Biden committed to the RFS during the campaign and he expects him to follow through on that commitment.
The American Coalition for Ethanol has spoken out to express support for Vilsack’s confirmation.

“We particularly look forward to USDA working with EPA to help get the Renewable Fuel Standard back on track and to recognize the role ethanol is already playing to address climate change, including new research that shows the great strides the industry has made. We also appreciate Vilsack’s vocalized commitments to utilizing and increasing resources to build out infrastructure for higher ethanol blends and looking for opportunities to help ethanol producers hurt from the economic fallout of COVID-19. Finally, we agree farmers have a role to play in addressing climate change, and we intend to work with USDA to ensure systems and markets are in place to reward farmers and biofuel producers for reducing greenhouse gas emissions.”
A full recording of the hearing is available on the Senate Committee on Agriculture, Nutrition and Forestry’s website.