Diesel stands at its highest national average cost since it was $4.088 a gallon on March 11, 2013. (Nirian/Getty Images)

The national average price for diesel continued to climb, albeit at a slower rate, rising 3.6 cents to a nearly nine-year high of $4.055 a gallon, according to Energy Information Administration data released Feb. 22.  Diesel’s price has climbed for seven consecutive weeks, totaling 44.2 cents. The last time trucking’s main fuel cost at least as much as its current price was March 11, 2013, when it reached $4.088. 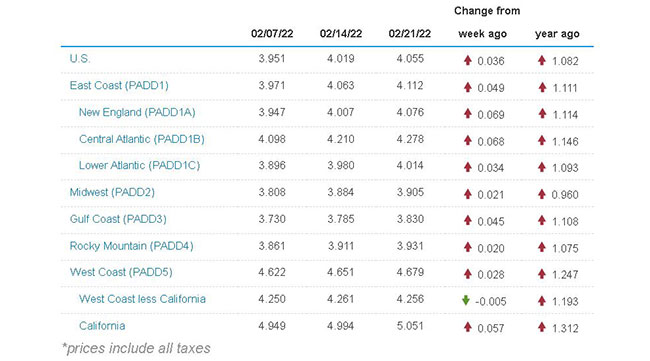 Diesel’s cost increased in nine of the 10 regions in EIA’s weekly survey, the exception being a half-cent decline in the West Coast less California. The price went up 6.9 cents and 6.8 cents in New England and the Central Atlantic, respectively.

A gallon of gasoline increased even more than diesel, with the 4.3-cent increase putting the national average at $3.53.

Oil industry analysts say Russia’s incursion against Ukraine is pushing fuel prices higher. It is estimated that Russia produces 10% of the world’s oil supply, and more than 30% of Europe’s natural gas is supplied from Russia. As a result of Russia’s actions, Germany has announced it is canceling certification of the Nord Stream 2 pipeline that would deliver Russian natural gas to Germany.

The starting point of  Nord Stream 2, in Ust-Luga, Russia. Nord Stream 2 is a 764-mile gas pipeline that will double the capacity of the existing undersea route from Russian fields to Europe. (AndreyRudakov/Bloomberg News)

In 2021, the U.S. imported between 12 million and 26 million barrels of crude oil and petroleum from Russia every month. Russia became the No. 2 supplier to the U.S. in August, according to Bloomberg News, and EIA reports that the U.S. took 17.8 million barrels in November, the most recent figures on record.

Also in response, the White House and its NATO allies announced they are imposing their first round of economic sanctions on banks, sovereign debt and some Russian oligarchs connected to Russian President Vladimir Putin, and more sanctions would be coming if the Kremlin steps up its military action into Ukraine. 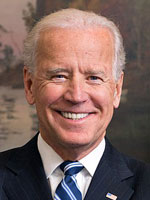 “Defending freedom will have costs for us as well and here at home,” President Biden said Feb. 22. “We need to be honest about that.”
He also said the White House would do what it could to “blunt” higher energy costs.

“We’re closely monitoring energy supplies for any disruption and executing a plan in coordination with major oil producing consumers and producers toward a collective investment to secure stability and global energy supplies,” Biden said.

After reaching as high as $95.46 a barrel Feb. 14, West Texas Intermediate crude oil declined slightly to $92.35. Still, that is up nearly $10 a barrel in a month and $30 a barrel in one year, when oil prices started to show signs of recovery after a year of downward pressure because of the pandemic. 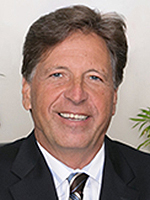 Tom Kloza, founder of the Oil Price Information Service, told Transport Topics fuel markets likely are in for a wild ride the next several weeks.

“Trying to figure out where oil prices are going and what impact it’s going to have is kind of an unpredictable script,” Kloza said. “We are really improvising with these prices.”
U.S. oil refining capacity took another blow the week of Feb. 21 when an explosion and fire at the Marathon Oil refinery in Garyville, La., disrupted production.

The refinery, which sits on the banks of the Mississippi River, has a daily refining capacity of 578,000 barrels. In 2009, the facility underwent a major expansion, making it the third-largest refinery in the U.S. The fire took place in a part of the complex that produces diesel fuel.

Host Michael Freeze discusses cleaner emissions and the GHG Phase 2 rule with Taki Darakos of Pitt Ohio and Dustin Smith at Wabash. Hear a snippet above, and get the full program by going to RoadSigns.TTNews.com.

Kloza said it is very likely that gas and diesel prices will reach levels similar to what they were in the spring of 2008 when the average price of gasoline hit $4.11 a gallon and diesel reached $4.73 a gallon. But he says diesel will be in short supply.

“We’re looking at $4 per gallon for gasoline and maybe $4.50 a gallon for diesel. But the question is how long these prices linger. I am not a believer that this is the new normal,” he said. “Winter is almost over, so most of the diesel molecules being used for heating are available. But look at all the home building that’s going on, and the boom in agriculture prices and mining and metals, and all of those are diesel-intensive and inventories are really low.”

As a result of the higher prices for crude oil, domestic oil production is increasing. The latest Baker Hughes Rig Count shows the number of operating rigs in the U.S. increased by 10 in the past week to 645 compared with 397 during the same period a year ago.

Kloza is predicting as a result of the higher oil prices many of the rigs that were shut down when prices plunged in 2020 will be reopened.

“The rig count is rising,” he said. “I do think that we will get above 12 million barrels a day for domestic production.”

In 2019, domestic oil production reached a record 12.2 million barrels per day before dropping 8% to 11.3 million, according to EIA.