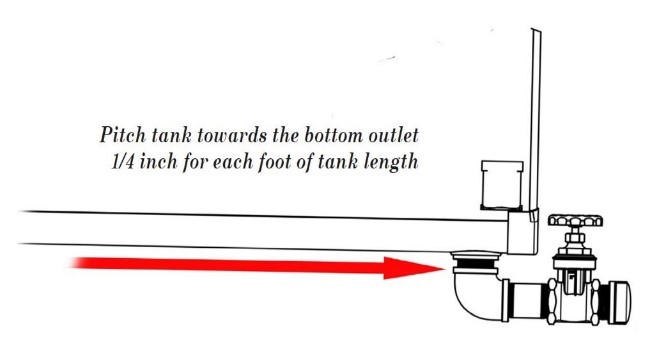 Let me paint a less than favorable image for you. Imagine you’ve purchased a new home and it’s your first morning living there. Before getting ready for work, you’ve got to shower. The water is warm, the water pressure seems perfect, but something isn’t quite right. It’s then you notice that the drain is not located on the shower floor, where it should be, but two inches up, just under the faucet.

Now, this is unrealistic. You’d likely have voiced your concerns during the home inspection. And yet, this is the reality for so many homes in our region that rely on heating oil. The oil tank is all-too-often side-piped instead of bottom-piped, the way it should be done.

Back to our shower scenario. Imagine showering each morning, standing in the filth and water that has built up in the two inches beneath the side-piped shower drain? Does it make your stomach turn even thinking about what might be lurking in the depths of that sludge?

Sure, it does, and rightly so. The same can be said for the one to two inches beneath the side pipe of your oil tank. And, I’ve got news for you. What lies inside those tanks is far more harmful than whatever you could possibly create in a shower. After all, it’s probably been that way for 25, 30, or even 40 years.

Just like your shower, the oil tank dilemma starts with water. All oil tanks are vented to the atmosphere, and the atmosphere (air we breathe) is absolutely full of water. Did you know that the average human processes over half a gallon of water every single day?

Your oil tank needs to breathe, too. Season after season, day after day, that tank is breathing like a set of lungs, and collecting water than has condensed on the inside. Unlike humans, who will absorb water into the body to sustain life, the oil tank has nowhere to put it. And since water is heavier than oil, it naturally sinks to the bottom of the tank and begins to fester. Soon after the water-line has been set up, it becomes a breeding ground for strains of fuel-eating bacteria that steal from your customer’s supply and their wallets. Making matters worse is that these bacterial strains (which can multiply from 1 million to 1 billion in about 24 hours) have a waste cycle, same as you and me.

Anaerobic yeasts and fungi excrete acetic acid, which is highly corrosive to steel and other metals commonly found in our industry. When they’re done eating the fuel and creating their concoction of corrosion, they die off, making room for their offspring. And, when they die off, they sink to the bottom of your tank, contributing to the black sludge that is commonly found when tanks must be removed.

Let’s briefly recap. Water in tanks will allow bacteria to move in, and bacteria causes corrosion. It’s a pretty simple and disgusting scenario. That being said, it is a scenario rather easily remedied by simple changes in that way we do things as an industry. How can we prevent the breeding ground from ever occurring in the first place? The solution is to allow gravity to be your friend.

Your home shower is pitched toward the tub drain, which is piped out of the bottom. This allows harmful and nasty bacteria and dirt to escape into the sewers or septic tank. The same should be done for your oil tank! Your oil tank should be pitched toward the opening (not less than ¼ inch for every five feet in tank length) and should be piped out the bottom, always. This allows moisture and particulate/bacterial matter to leave your system and get cooked out through combustion, every time the burner calls. It’s a simple fix, but one we don’t often think about.

Summer months can be more challenging. Yes, we still shower from April through October, but the oil burner isn’t typically working too hard during this time. So, how can we protect our supply and oil tanks during the warmer months when little is happening? Your best bet is implementing preventative defensive measures through chemical application—in short, introducing a stabilization package that has been designed and manufactured to handle both generic ULSHO and biodiesel blends. This is paramount, given the distillate pool’s future and the advent of biodiesel as the alternative fuel of the future—one that will likely save our industry.

But I digress. During the months where oil use is largely stagnant, you have to rely on the integrity of your product to take care of itself. By stabilizing the fuel before the delivery is made, you can effectively control the moisture inherent in all fuels (and the atmosphere), and prevent harmful bacteria from ever setting up in the first place.

Rethinking our oil tank installation and stabilization of fuel is a no-brainer. The practice of both will protect your supply, brand, and customer from having to deal with headaches that can include no-heat service calls, burner breakdown, and even tank failures. These problems not only annoy and frustrate your customers, but they cut into your bottom line as well.

No matter how clean the water may be coming from a shower head, it doesn’t make a difference if you’re standing in sludge. And, while you may stand behind the quality of your delivered fuel, what happens to it when it gets dumped into a filthy and corrosive environment?

Cleaning up our act starts at the bottom. Fuel has changed, and with it, our thinking should, too.

Barry Aruda is the Northeast Regional Manager for Advanced Fuel Solutions. As an admitted “fuel quality fanatic,” he spends a great deal of his full-time job testing fuel for analysis, recommending preventative defensive strategies, and working with dealers to overcome the challenges of housekeeping and changing technology.