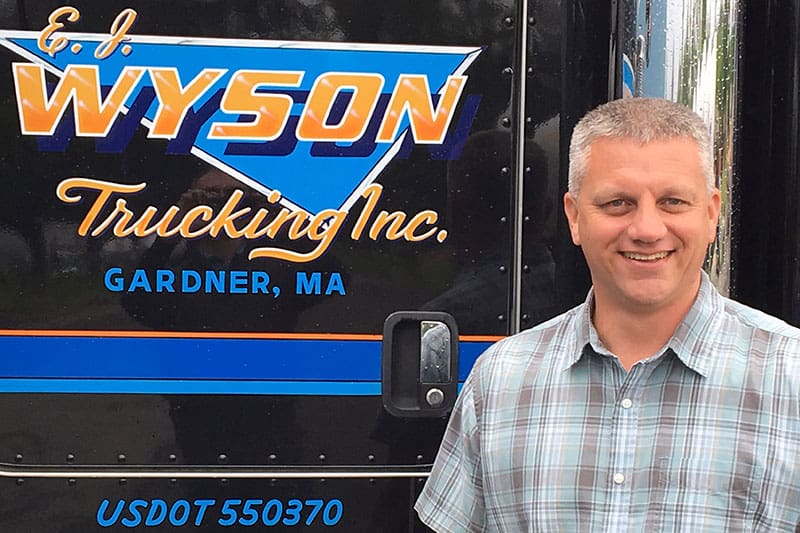 Eric Wyson, owner of E.J. Wyson Trucking, Inc., Gardner, MA, began his own company like many do—with a single truck. In his case, it was a 1990 379 Peterbilt. Twenty six years later, Wyson Trucking fleet consists of 22 tractors, with five owner-operator vehicles. On a day-to-day basis, the Wyson trucks can be found hauling petroleum products in cities and towns from Massachusetts to Connecticut, over to New York, and north as well—along the open roads of Vermont and New Hampshire.

Anyone operating a tractor knows the strain placed on their machine. Wyson’s 1990 Peterbilt is a dinosaur compared to the EPA engines of today. And while some may argue that the old rigs were sturdier and more powerful than today’s machinery, the fact remains: we cannot look back. Tier III, IV, & Tier IV Final engines dominate the roadways in 2019.

The newer trucks are complex, led by their High-Pressure Common Rail engines, and recognizable by the little blue cap signifying the diesel exhaust fluid (DEF) tank. The black exhaust of yesteryear has largely been done away with, thanks to Ultra-Low Sulfur Diesel, and the soot that each of us remembers flowing into the atmosphere while the truck shifted, is now caught inside the diesel particulate filters (DPFs)—standard on all trucks since the middle of the last decade.

But, if the soot and ash is caught inside the DPF, how does it get remediated? In comes the DEF, designed to automatically blow through the sooty filter when the truck is in use, and the engine has reached approximately 1100°. In theory, this system works, periodically conducting what is known as a “passive regeneration.” The DEF fires through the filter, cleansing it, and allows the soot to be exhausted from the system safely.

Technology is certainly great when it works. However, whether it is your iPhone, flat-screen television, or a DPF system, that is not always the case. When a DPF system fails to conduct a passive regeneration, the driver is prompted to conduct an active regeneration. This typically results in the truck alerting its operator that he/she must press a button to cleanse the DPF with a dosing of DEF and diesel fuel. This action is costly, since diesel fuel is jettisoned from the fuel line directly into the DPF several times. Nobody likes to waste fuel this day in age.

Occasionally, no matter how well the system is set up, a manual/mechanical regeneration may need to be done. This is the worst-case scenario, because it spells downtime for the business. The truck must be off-road when the DPF is removed and professionally cleaned. Handfuls of niche businesses have been born from the DPF movement—those whose entire business model is traveling to a downed truck and conducting a manual cleaning. More money out of the fleet budget.

In steps Eric Wyson who, for the last two years, has been running a premium fuel blend through his bulk tanks and into his trucks. Wyson is a dedicated user of the multifunctional diesel product Optimum Performance Technology/Anti-Foulant, or OPT-AF, for short. Built around the most contemporary DW-10 detergent, the OPT-AF package is designed to protect DPF componentry from ever having to do an active or manual regeneration. Secondary and tertiary functions include protecting High-Pressure Common Rail injectors from gumming up, and removal of microscopic carbonaceous deposits known as asphaltenes. Unchecked, these particles can foul an injector and eventually destroy it—something that didn’t leave Eric Wyson feeling too warm and fuzzy.

“Since beginning the OPT-AF program, we’ve seen a huge difference in the DPFs on our trucks,” Eric tells me. “Recently, we sent out a DPF filter that came from a truck that had run about 230,000 miles. When the cleaning company baked the filter, they were able to remove a pound and a half of ash.”

Surprised, I asked him about that. He, too, was initially concerned with the finding.

“The guy said to me that he’d never taken that much out of a truck, and he was astonished that the truck had never had a single issue with regens. He told me ‘whatever you’re doing, keep doing it,’ and the truck’s unhindered performance ‘was a testament to the level of our fuel treatment program.’”

“We have to protect the fuel because it touches every ounce of my business, my investments, and the brand I’ve worked hard to establish. Not all fuel is created equal, that’s for sure.”

Eric is militant when it comes to his fuel treatment program. His bulk tanks on site in Gardner have a large sign beside them that reads: DO NOT FILL TANK WITHOUT ADDITIVE!!! Since beginning the program, he’s taken the time to educate his own staff/drivers about the importance of protecting his trucks from the inside out.

“Every minute a truck isn’t running is damaging to the bottom line and the brand. I’ve had trucks downed before, and it’s difficult because I’ve got my own customers counting on me to get a load where it needs to be, when it needs to be there. That’s important. We don’t have those problems anymore. MPG loss, shortened filter life, regen issues—none of it.”

Ask yourself: Are you ready to establish your own treatment program? Your brand might depend on it.