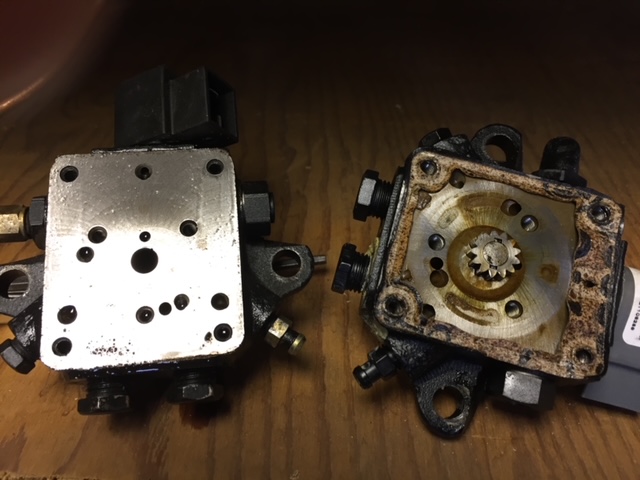 Not long ago, I was contacted by a Pennsylvania, independent heating oil dealer that was struggling with multiple service call-backs due to seized  residential home heating fuel pumps.  The owner of the company described his frustration with this customer’s, “No Heat” calls and wondered what his customer must be thinking?

When he got to the home, he found the heater primary control had gone off on safety causing the heater to shut down. Pulling back the transformer, he noted the pump coupler, squirrel cage, and fuel pump were tight but was able to free them up on the burner. After reassembly and pressing the reset button atop the primary control, the heater started and ran through a normal cycle. He presented an invoice for the service call; the customer was happy to have heat. Problem solved, or so he thought!

About a week later, the same customer called and had no heat. Upon arrival, he again found the heater off on safety. The fuel pump coupler and squirrel cage were tight and the fuel pump was bound. At this point, he replaced the fuel pump with a new one straight of a box and ran the heater through a normal cycle. For good measure, he cycled the heater on and off a couple more times.  Because he had to replace the pump, he charged the customer for just the part and he ate the labor.

Within two weeks’ time, the same customer called again with no heat. Again the heater was found off on safety. Again, the pump coupler, squirrel, and fuel pump were bound up. “What is going on here, could it be a bad pump?”  He pulled the new pump installed last service call and replaced with another new one. He assured the customer the issue was solved and there was no charge. When he left the customer, the heater was running and producing heat. Wait a minute…the fourth call a week later!

At his wits end, the dealer called his HVAC supply house. Unknown to the heating oil dealer, his service calls and pump problems were actually suspected to be related to the stability and storage quality of locally available heating oil in customer tanks. I had encountered this same pump sticking scenario with other Pennsylvania dealers and learned this issue is wider spread than the North East. As a matter of fact, one of my associates at AFS had previously worked with NORA staff members and a dealer in Washington State with the same type of pump failures.

The NORA laboratory staff had received numerous contacts about pump sticking field issues. NORA identified the brownish substance that was coating the internal gear set and fuel pump components and termed the contaminant as “ Adherent Particulate ”.  This “Adherent Particulate” attaches to the pump internals and can cause binding, restriction, and likely pump failure.

Lab and field testing is ongoing and the exact cause of this pump binding issue is under investigation. Early observations of testing indicate that the sampled fuels have shown water and sediment were typically higher than ASTM  standards, the acid number of the fuels was often higher than the 0.3 maximum for ASTM D396, and active microbial contamination may be an addition source of the pump binding issues. As fuels are exposed to these and other oxidative contaminants, the fuel continues to degrade in storage and “Adherent Particulates” or sticky varnish like contaminants develop.

Cleaner burning fuels were mandated by the US EPA and refiners responded with changes to the refining process that lowered sulfur content and adjusted fuel aromatics.  These changes in the refining process have resulted in fuels that meet ASTM Specifications requiring downstream care minimizing the potential, unintentional consequences of contaminated fuel and poor storage practices. Under the conditions described in this article, stored home heating fuel can be the victim of “Adherent Particulate”. Today’s fuels are not as forgiving as yesterday’s legacy fuels.

So what can be done ?

In my role as a Fuel Quality Consultant at AFS, I have had the opportunity to test fuels, evaluate the laboratory results, and then provide a treatment recommendation that may, or may not, include additive solutions, terminal filtration or blending equipment for home heating dealers and fuel distributors. If you are already experiencing the pump varnishing or “Adherent Particulate” issues, here are a couple things you can do:

Pump Out the old fuel that has aged and replace with fresh fuel .  This is probably not a cost effective alternative due to cost but typically solves the immediate problem. You may still have to replace the installed pump that is already compromised.

Install a small micron, spin-on fuel line filter to trap the “Adherent Particulate”. This typically works, but comes at an increased cost, potentially becomes an additional maintenance issue and or potential emergency service call. These fixes are resolving the immediate pump issue but are treating the symptoms and not the source of the issue. If this pump binding issue has been intermittent or may have not been identified by your field tech, consider the following …

Review and update your company fuel quality protocols to include your storage and customer tanks (fuel analysis) when trouble shooting equipment issues. Always check for water, especially outside tanks at the annual tune-up. Improved fuel housekeeping protocols will help identify oxidative contaminates that can be removed or treated before they cause operational issues. Updated fuel storage protocols accompanied with a proven fuel treatment program can proactively stabilize stored fuels to prevent conditions that can promote fuel aging and the development of “Adherent Particulate”.

As one of my associates recently, so eloquently stated, “ Fuel Quality does not come in a bottle!”  Fuel Quality is developed with a combination of attention to the storage protocols of the fuels you handle and pass on to your customer’s. The fuel supply chain doesn’t end until the fuel reaches your customers home! It is the quality burn at the nozzle that reflects storage habits.

Start with the training of customer facing staff with a sound fuel quality story supported with available storage technologies, including filtration and contemporary fuel additive technologies that are proven to reduce fuel aging, extend fuel stability in storage, and help to prevent contaminants like “Adherent Particulate”.

If you’d like to learn more about this fuel quality phenomenon and others that may be impacting fuel related service calls and your bottom line, call or email me for a complimentary review of your storage practices and open, customer equipment issues.  Contact Mark Smith @ (978) 494-2494 or mark@yourfuelsolution.com