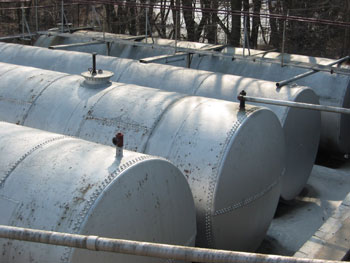 With spring on our doorstep, the time has come to shift attention away from winter performance and consider other, equally important measures of diesel fuel quality.

While gelling and icing are no longer issues, warmer temperatures, without fail, bring an entirely new set of fuel challenges. Some involve the fuel itself and others involve the system that moves diesel from tank to injector. Let’s look at what you can do to maintain your system, starting with the hardware.

First, check fuel hoses and fittings. Changes in temperature cause clamps to loosen. If they do, hoses vibrate, causing leakage. Check hoses for splits and cracks. Make sure they are seated on their fittings. If clamps need replacing, don’t get the inexpensive ones that use spring pressure or ones with slits for the worm screw. They can damage the hose if tightened too much. The best ones are temperature compensating, constant torque clamps. They are smooth all the way around the hose. They have a spring next to the adjustment screw to maintain clamping force as temperatures vary.

Springtime is game time…plan to change filters that may have been damaged by ice or clogged with organic slime or gelled fuel. Drain the water from the fuel-water separator, then, being careful not to spill any diesel, drain any fuel according to manufacturers’ instructions. You can then safely change the filter element if needed.

Ultra-Low Sulfur Diesel fuel is a breeding ground for organic growth. It’s imperative to regularly check for fungus and bacteria, which take nourishment from hydrocarbon fuel and oxygen from water that has condensed in the tanks when temperatures cool at night. The interface where the diesel floats on tank water bottoms is where you’ll find the slimy organic colonies known as biofilms. Drawn into the fuel intake, these biofilms can plug filters and stop any diesel-powered equipment it reaches.

Focus on your storage tanks, large and small alike. Drain or siphon each tank until you see only clear fuel. If the amount of organic growth is excessive, treat your next tank of fuel with a biocide manufactured for the purpose. Don’t mix the biocide with your regular-use fuel treatment, since there may be incompatibilities. Biocides are EPA registered pesticides and are toxic.  If you do not see an EPA registration number on your biocide container it is not a legitimate biocide.  And it goes without saying: read all of the directions printed on the label and be certain you understand the warnings, handling, and treatment ratios for maximum results.

Be careful not to over treat your fuel. Over treatment can lead to a phenomenon known as reversion, where the performance gains achieved by the proper dose of the additive are reversed due to an overdosing of the fuel. In extreme cases, reversion can leave the fuel even worse off than its pre-treated state.

Many diesel powered operators use fuel conditioners only in winter to control water and ice, and to prevent gelling. If you’ve done your homework, you know that time, temperature and moisture can conspire to compromise fuel system performance in every season.

Proper use of additives, such as detergents and dispersants, will control the formation of deposits that could affect fuel system components, including combustion (injectors) and after-treatment systems (DPF regens). They also control water that condenses from the air in the tank or that could enter during refueling. Most emulsify the water, keeping it separated in tiny droplets that pass harmlessly through injectors. Some conditioners de-emulsify the water, making it harder for the fuel to suspend it. The water then falls through the fuel and collects at the bottom of the tank where it can be easily removed.

Fuel conditioners, also called additives and treatments, have ingredients that perform other functions as well.

Lubricity agents help lubricate and prevent scoring on internal fuel system components including pumps and injectors. They became essential once sulfur, a natural lubricant, was removed to make ultra-low sulfur diesel. Today, the lubricity provided by biodiesel blends of 2 percent or more is enough to satisfy lubrication requirements, which would be 520 micron wear scar on the HFRR test.

Cetane improvers, once needed for quicker winter starting and white smoke mitigation, are not as important with high quality fuel. Foam inhibitors, corrosion inhibitors and stability improvers that prevent fuel from oxidizing are important additives year round.

One of the best things you can do to maintain your fuel system is to purchase fuel from trusted retailers and know that the fuel meets its respective ASTM standards.  Be vigilant with housekeeping and turn fuel over frequently. And if you have any questions or would like guidance specific to your fuel quality maintenance needs, don’t hesitate to contact us for a complimentary consultation.