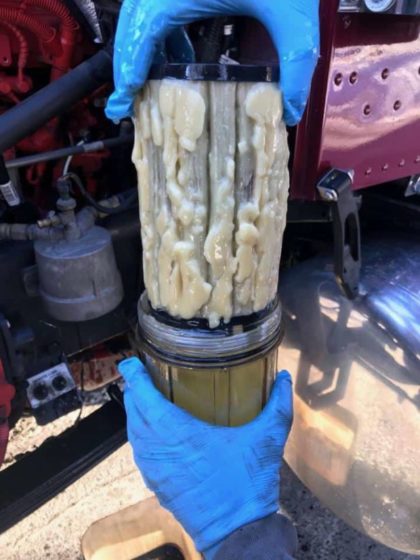 With roughly 75 days of colder temps ahead of us, it’s a prudent time to revisit the winter of 2018, when a historic cold snap gripped New England and the Mid-Atlantic, leaving a trail of sidelined diesel vehicles in its wake. Beginning on Dec. 26, 2017 and stretching until Jan. 8, 2018, every major city in New England experienced below-normal temperatures for at least 13 consecutive days — 10 of which were at least  10°F colder than normal. Boston, for example, saw its most extreme cold snap in 100 years.

The relentless freeze challenged fuel handlers throughout the region, causing sporadic operational issues for diesel fuel and heating oil professionals and their customers. One phenomenon our team began noting was the formation of a white grease-like substance that suffocated fuel filters and didn’t melt at room temperature—as one might expect—nor did it have anything to do with biodiesel.

With regional cloud points ranging from 9F – 15F, this substance would form after a delivery truck offloaded the fuel from its cold aluminum tank into above ground storage tanks subjected to ambient temperatures as low as 3F. The fuel would then be pumped into diesel vehicles, where it was left to sit idle and unprotected from the elements over a holiday weekend.

It’s important to note here that even if this fuel were properly winterized and rated to operate down to a -20F CFPP (cold filter plugging point), without garaging the trucks, heat taping the filters and saddle tank, draining water from the saddle tanks (via it’s petcock), or maintaining the water-fuel separators, it would still likely be compromised while sitting in the truck’s filter housing for such a long duration under such extreme conditions. So, when it came time to operate the trucks, it’s not all that surprising that some fleets were experiencing trouble with cold starts.

When something like this occurs, we typically tell our clients to remove their filters from the housings and bring them into the garage. If after 20 minutes they see a pool of water under the filter, moisture is contaminating their fuel. If the material begins to melt, slowly sliding off the filter media, and looks creamy, it’s probably paraffin. If the material does not come off the filter, however, two additional scenarios are possible.

The first scenario is when biodiesel is present, and moisture extracts monoglycerides out from the fuel, resulting in wax buildup on the filters. The second, less commonly recognized scenario, happens in #2 ULSD, which is a mixture of n-paraffin hydrocarbons (typically C8-C32). The longest chain length hydrocarbons, >C20, have melting points >100F. These paraffins are only liquid in diesel fuel at room temperature due to the lighter chain paraffin (<C16). As the fuel is exposed to lower temperatures, these longer chain hydrocarbons start to come out of solution and get caught on the filter, eventually blinding it. The lighter ends remain a liquid and pass through the filter or get trapped in the filter canister. These liquids are typically what our team finds in the container when it arrives at our testing facilities. Without a strong solvent such as xylene, the heavier end paraffin that blinds the filter will not go back into solution. In the absence of higher temperatures, diesel fuel itself doesn’t have enough solvency power to dissolve the wax on the filter. Heavy, waxy fuels have more of these higher chain hydrocarbons, which is why our region had been seeing more of this “white grease” that doesn’t melt at room temperatures. Under these circumstances, it is not biodiesel related, just long chain ULSD hydrocarbons—something that your regional suppliers can’t control.

Whoever is treating the fuel with additives and kerosene is responsible for proper and accurate blending. The company lifting the fuel from the terminal is responsible for making sure that the delivery truck they are using is, to the best of their ability, kept clean and dry. (They should be sticking the customer’s tank before and after deliveries as well.) The customer needs to understand the operability points of the fuel as well as the seasonal temperatures that the fuel will subjected to. If the fuel is rated for a specific CFPP that is a benchmark, when it leaves the terminal and is introduced into another diesel fuel (even if it is from the same terminal) the fuels then become different from what was lifted from the rack.

Know what is in the tank, understand what you are buying, and plan accordingly with preventative fuel quality maintenance strategies. Clean, dry fuel that is formulated to perform in cold weather climates is a responsibility to be shared by all.  Now, will history repeat itself and, if so, will you be prepared?